The people we love aren’t “fat” 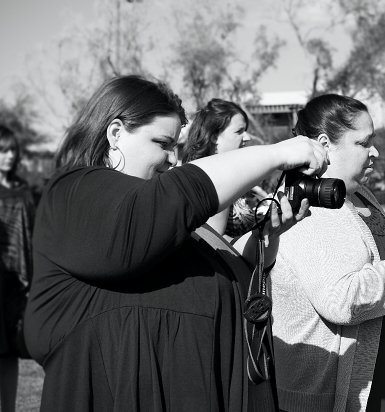 [image: photographing the happy couple at my younger brother’s wedding]

Netflix released Gilmore Girls on their streaming service last month and I, along with many other people, have enjoyed traveling back to that quirky little Connecticut town and following the saga of the Gilmore Girls and crew.  When people talk about body-positive characters on television – Sookie St. James is a go-to example. Sookie was a well-developed character who was a normal person – she had friends and family. She got married, had kids. Her size was not the butt of jokes or self-deprecating comments. Other characters were also fat on the show – Miss Patty the dance instructor and her pal Babette – – both who got to just be interesting people on the show, not props for fat jokes.

And yet as I’ve been re-watching the show, I’ve noticed that Gilmore Girls is not a particularly fat-positive show; the fat jokes abound.  When it’s time to criticize someone or suggest that someone is undesirable – fatness is a go-to example. It’s not an overarching theme that is blatantly obvious or anything, but it’s there.  Had I more forethought I would have recorded all the fat jokes as I watched them, but I didn’t, and I’m not about to start over. If you would like to take on that project, that would be lovely!

Yet despite the fact that Lorelai, Rory, Luke, Emily, Richard, Logan, Paris, and others make comments that fat is somehow bad or undesirable – those comments are never made directly to or about Sookie, Patty, or Babette.

When I first started looking at size-discrimination and how it affected my life I had a few people tell me, “but you don’t act fat.”   On another blog years ago I posted the picture that’s in this entry and said I loved the picture and it’s candid beauty- capturing me in a moment I was enjoying.  That was a big step to see beauty there since my arms have always been the hardest part of my body for me to love. Someone commented that they too liked the picture and didn’t see me as “fat.”  Which confused me because the picture clearly shows “fat.” It can be both a good picture and a picture that shows a fat person – these things are not mutually exclusive.

The obvious problem here is that some people are definitely fat. It needs to be OK to use that word. That word deserves a neutral stance as an adjective. It’s why so many people in the body-positive community embrace that word and use it proudly. I am so used to calling myself “fat” in the same tone as when I report on my brown hair or blue eyes that every once in a while when I meet new people, I see the way they are caught off guard. It’s a radical act to take a word that is being used as a weapon and to assign it to yourself, to make the public see that when you use “fat” like an insult that you are talking about me, and you and I both now know that’s unacceptable.

When we acknowledge that our friends and loved ones – the people we know to be smart and ambitious, dedicated and loving, disciplined and full-of-life, can also be people who are fat then we will start to see the humanity of all fat people rather than dismissing them as caricatures of undesirable qualities. When we acknowledge that our friends and family are fat and still deserve to be treated with dignity and respect and love then we start to recognize when we make unconscious judgments about strangers based on little more than their body size. We start to not cringe when we are seated next to a fat person on an airplane. We begin to catch ourselves when we make snap judgments. We learn to better love our neighbors when we start to critique the way we use words that are deemed “negative” and who we assign them to and who we say are exempt from them.  And if our own body is fat, when we start to realize that our fat friends and loved ones are people worthy of love and respect – then we start to realize that maybe our bodies have not doomed us to a life of shame and rejection.

Language matters. Understanding our language and how we use it for each other and ourselves matters.

← A Feast Without Shame
Book Review: Eat With Joy →

7 Comments on “The people we love aren’t “fat””