This morning as I drove over to my brother and sister-in-law’s house to hang out with my niece for a few hours I had the radio on to the local Christian station. They were talking about some McDonald’s diet. “Oh, here comes another Super Size Me conversation” I thought, but it was different. They talked about some science teacher who ate McDonald’s for three meals a day for something like six months and actually lost weight. He also added a walk to his daily schedule and didn’t have the same “eat everything on the menu, always say yes to the upsize” rule as the guy of Super Size Me fame did, but still, he ate McDonald’s for three meals a day for six months and lost weight and some of his other health markers (cholesterol and such) went down.

I was briefly encouraged by this conversation. I’m not a fan of McDonald’s for a variety of reasons –but I recognize its immediate affordability and efficiency in the lives of many people and I like to avoid demonizing people who are just trying to make life work or choose other hills to battle on.

So I was somewhat encouraged by the conversation on the radio for a minute – a conversation that pointed out that everything we assume about health and food isn’t necessarily true. That “bad” food can equal weight loss and lower cholesterol.

But, without missing a beat they went immediately into, “It’s all about discipline. It’s about self-control. If you make wise decisions you’ll lose weight. We just need to have self-control.” I lost count of how many times some form of discipline or “self-control” was said. Once again emphasizing that our weight is somehow all in our hands and our choices and if we are smart enough and dedicated enough we’ll lose weight. We can even do it at McDonald’s now –if we just make the right choices. I am not advocating against self-control. I’m advocating against the equation that self-control=weight loss. That assumes that the “right’ answer to that equation is thinness. That’s a faulty equation.

And then the morning show hosts segued into the music and when I heard the opening notes I turned the music up and sang loudly along:

I sang the words as a prayer – that these words’ appearance in the memory-building method of song would stick around longer than the shame-inducing words that came before it. That the words of the song would ring true inside the minds of the radio DJs – that they would know our bodies are not an acceptable place to hang our shame, that our bodies are not up for spiritually-backed scrutiny. That our bodies are called Redeemed. I sang the words loudly as a prayer that the others in their cars and homes and offices listening to the same juxtaposition of “be self-controlled and make yourself right and slim” with “bring your shame. . . .when others say I’ll never be enough…there’s a voice that calls me Redeemed” would hear the beautiful life-giving truth in the song and hold on to that. 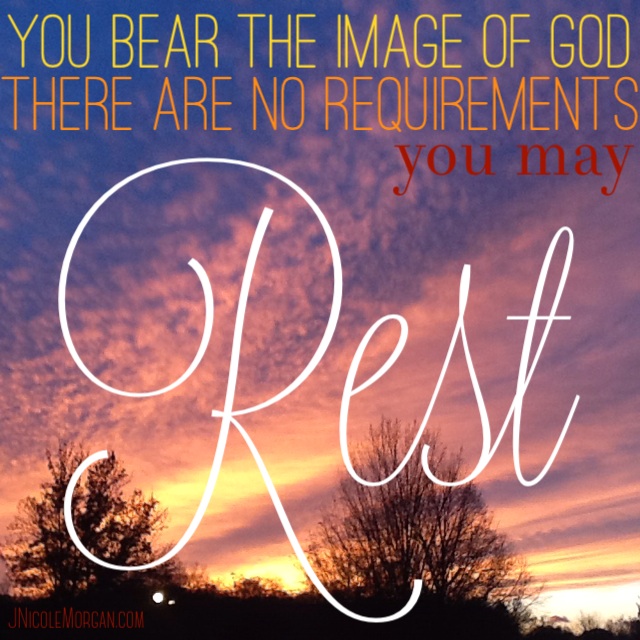 Theologian Marva J. Dawn talks about the community of believers God desires for the Church.** Dawn, who has physical handicaps of her own (debilitating disease that affects her legs and vision), acknowledges that she cannot live up to the body demands placed on her by others or by herself. She asks: “What kinds of pressures are you under because you have let yourself, society, your family, or others around you put you there? How has that pressure caused you to function even less effectively because of the guilt and frustration associated with the failure to meet the performance principle? Notice how such conformity destroys our [community] as Christians.” (pg 35) She laments her own struggle to accept her handicapped body after previously living an athletic life. Dawn says, “I want to learn to rest in the knowledge that I am doing all I can to take care of my body. There are no requirements.” (pg 34) That is the peace I want for every fat Christian. I want to encourage nutrition and activity to the best of one’s abilities because our bodies are important, and then tell these bearers of the image of God that there are no requirements, you may rest.

[image background:  the nightly view out my apartment window for a couple years. Those sunsets always initiated a deep, cleansing, breath.]

** Marva J. Dawn, Truly the Community: Romans 12 and How to Be the Church, (Grand Rapids: William B. Eerdmans Publishing Company, 1992.)

3 Comments on “You May Rest”